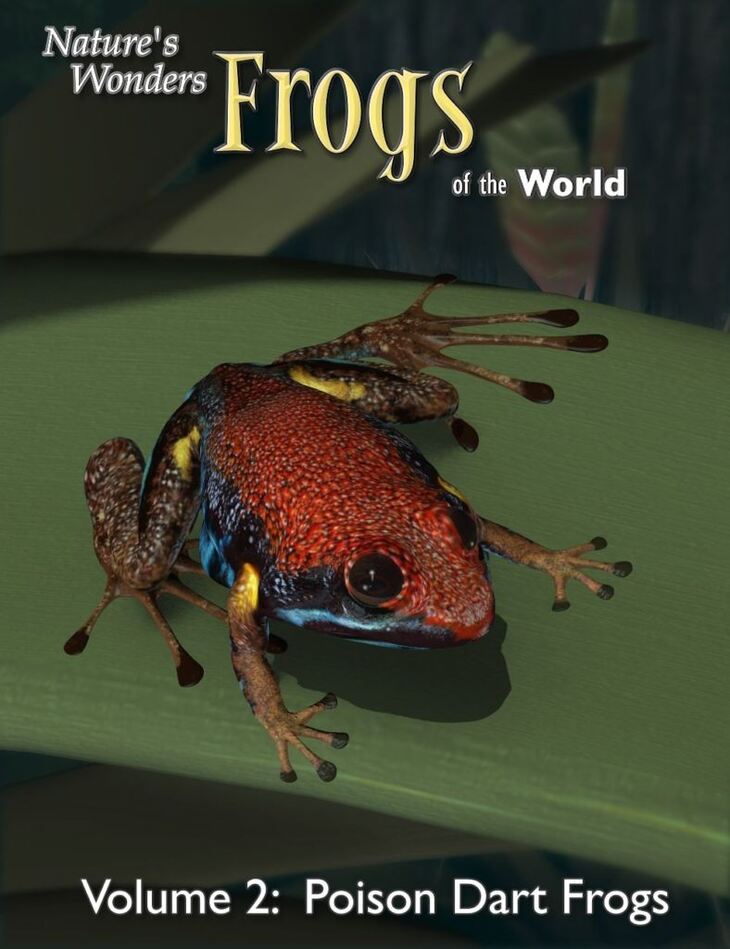 This second volume of Frogs of the World focuses on the Dendrobatidae family, of which there are over 170 species. These spectacularly colored frogs of Central and South America are commonly called "poison dart frogs". They acquired this name due to the indigenous natives, who use their toxic secretions to poison the tips of their blow darts.

The warning coloration of these frogs is correlated with the toxicity of the species. Its function is a warning to potential predators that the prey animal has defenses such as being unpalatable or poisonous. Thus their aposematism helps prevent them from being attacked. However, other frogs have cryptic coloration with minimal to no amount of observed toxicity. The species that have the greatest amount of toxicity derive this from their diet of ants, mites and termites. While the species that exhibit cryptic coloration and have low to no amounts of toxicity eat a much larger variety of prey.

Some toxic compounds found on poison dart frogs' skin have pharmacological properties that have proven to be valuable in bio-medical research. Medicines to fight HIV, Alzheimer's, Cancer, as well as painkillers over two hundred times more powerful than opioids, without the addictive properties, have been produced from them.

Most species of this family are threatened due to human infrastructure encroaching on the places they inhabit. This in turn threatens the discovery of new medical breakthroughs.

The set comes in two versions: a Poser version that supports Firefly and Superfly (Superfly requires Poser 11+) rendering and a DAZ Studio version which supports 3Delight and Iray rendering.